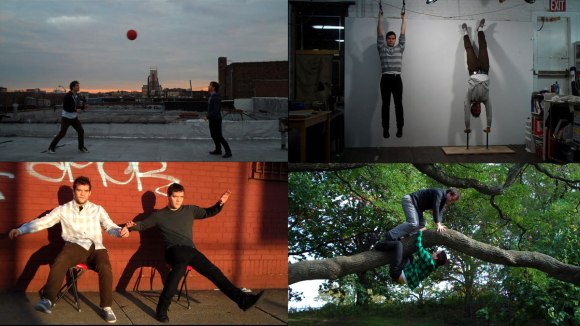 From 2010-2011, Alan and Michael Fleming began living apart for the first time in their history as twin brothers. Stretched between New York and Chicago, they were forced to redefine their practice and reinvent their collaboration across two different time zones. This separation came after many years of a shared embodied art practice where proximity and presence were a necessity. GAME ON features two bodies of work from Alan and Michael Fleming; one from this year of separation and the other made after reuniting in New York. While apart, the Fleming Brothers attempted to continue their practice through “psychic games”, postcards, Polaroids, calendars, and other ephemera as a record of their communication. Playing with the cliché of latent twin psychic abili­ties, their efforts became a genuine investigation of cerebral collaboration. Trying to think of the same color every day, or playing “rock, paper, scissors” over the phone and not knowing who won for months became a metaphor for a disjointed studio practice. Through these materials and objects they tried to map their distance and reflect on what their collaboration meant (or could mean) now that they were separated. The second body of work on display (made while in the same city) captures the brothers reunited in play through a variety of different media including performance for video, drawing, and sculpture. Themes of measurement, learning, and failure are made apparent in humorous artworks such as “Game Over (Tetris Drawing Series)” where the brothers made draw­ings of their losing games at Tetris, or “Who’s Bad?” a video of Alan, a trained dancer, teaching Michael, an amateur, how to dance like Michael Jackson. Like a game of street hockey interrupted by traffic, this exhibition represents a temporary hiatus of play. As the cars pass, the artists think of the potential game ahead. Eventually the players return to the studio and begin again.

Alan and Michael Fleming have shown their collaborative artwork throughout the United States and abroad. They are current fellows in the AIM (Artist in the Marketplace) Program at the Bronx Museum of the Arts and International Artists in Residence at the NARS (New York Art Residency & Studio) Founda­tion. They have performed at the Museum of Contemporary Art Chicago, the Chicago Cultural Center, the Centre for Contemporary Arts in Glasgow, and the Factory for Art and Design in Copenhagen. Their videos have been screened internationally in Copenhagen, Lviv, Ukraine, Rio de Janeiro and Berlin. Their work has appeared in TimeOut, Art Slant, Buzz Magazine, Chicago Art Magazine, and Artforum. The Fleming brothers received their MFA in 2010 from the Performance Department at the School of the Art Institute of Chicago, which they attended as a collaborative. As of 2012, they are both based in Brooklyn.

More information about the artists can be found at: http://www.spatialinterventions.com 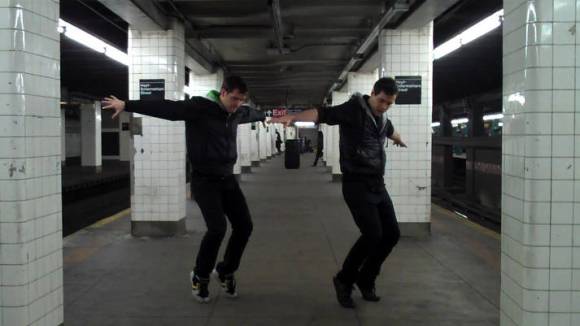 Artist of the Month